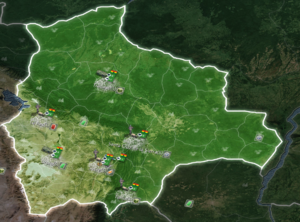 The history of Bolivia starts with the Tiwanaku empire, high up on the Altiplano Plateau. No one is entirely certain why this empire collapsed, but the artifacts they left behind hint at a great civilization of architects and builders with a penchant for human sacrifice. Eventually, the Incas would claim the land in their quest for mass expansion during the 15th century, a quest which would be quelled in 1533 by the Spanish conquistadors led by Francisco Pizarro.

This conquest by the Spanish would lead to an age of revolt and rebellion in Bolivia. With constant tributes needing to be sent back to Spain as well as inhumane working conditions within the mines, one after the other the people rose up. It is estimated that over 100 revolts happened in Peru and Bolivia in the 18th century, a problem which Spain tried to solve by executing natives in the thousands. Eventually, the fall of the Spanish king during the Napoleonic Wars would lead to the people rising up en masse, till Bolivia finally became an independent state in 1825, and was named after the hero of independence Simón Bolívar.

Unfortunately, Bolivia’s troubles did not end here. As time went on, Bolivia would continue to be ravaged by war, rebellion and military dictatorship, including the 5 year War of the Pacific which would reduce Bolivia to a landlocked nation. Eventually, in 2005 Evo Morales would rise to become the first indigenous Bolivian president in history, and would succeed in nationalizing Bolivia’s resources and growing its economy. However with his current exile in Mexico amidst weeks of violent protests, perhaps Bolivia’s dark days aren’t over just yet.

Medium-Sized Nation. Bolivia is evenly split between the mountains of the Andes and the lowland jungles of the Amazon.

Bolivia makes up for its weakness as a landlocked nation by having its borders almost entirely surrounded by mountains and jungle terrain. This may seem like a hindrance at first, but these natural defenses are quite the boost in the early game to stop players from invading before Bolivia can build up its army. As a further benefit to the player, the only neighbouring nation which has plains along the border is Paraguay, a small AI nation ripe for the picking. 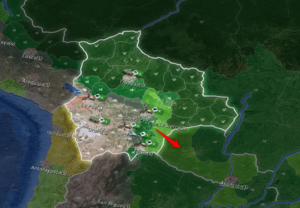 Of course, being difficult to get in also means that it’s difficult to get out. Luckily an Eastern doctrine means that Bolivia can get a head start with helicopters, so an investment into air isn’t too hard. Some Anti-Air Artillery is also always recommended, in case someone tries to get their own aircraft into the nation.

Finally, it’s important to note that Bolivia is a small nation surrounded by several much larger ones. War on all fronts would certainly lead to devastation, so the player needs to pick her battles. Perhaps the player may want to recreate history, remaking the Peru-Bolivian Confederation to gain access to the sea, and use it to crush the Chilean and Argentine nations and rewrite the history of 1839.

Overkill does not change too much for Bolivia as the nation was already surrounded by mostly playable nations to begin with. The only new entry to the battlefield which happens to neighbour Bolivia is Paraguay. This may seem like a minor hindrance at first, but Paraguay is the only nation to not have mountains or jungle along its border with Bolivia, instead having easily accessible plains. Left unattended, this small nation may prove to be a rather large thorn in Bolivia’s side.

However, there is always an alternative to war. With Uruguay, Guyana and Suriname also entering the fray, a large scale alliance with Paraguay and the rest of Brazil’s neighbouring nations may actually be the trick to taking down this giant of a nation. Bolivia just needs to watch its back, as this mighty invasion to the north may be just what Chile and Argentina need to pounce up from behind.

Bolivia is quite unique in Rising Tides. With nations sinking rapidly all around it, somehow Bolivia has managed to stay stuck as a landlocked nation. In a map primarily focused on naval combat, this certainly puts Bolivia in an awkward position. An alliance with one of its neighbouring nations is certainly recommended, with Brazil being a particularly enticing friend if the player would like to make an early beeline to the Victory Site on Ascension Island.

The player also now has to contend with Amazonia, the new nation north of Bolivia. Being quite large and with a Domed city not too far from Bolivia, this isn’t a nation the player should ignore. A possibility could be using the previously mentioned alliance with Brazil, as well as with Amazonia’s other neighbouring nations, in order to take this beast down before it has a chance to strike.