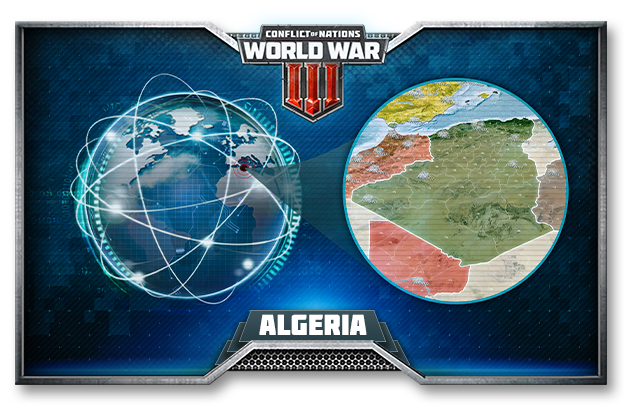 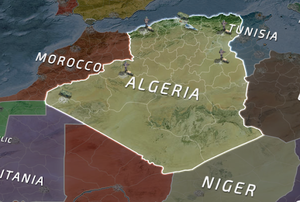 A country of overwhelming size, Algeria is not only the largest African country but it is also the largest Arab country in the whole world. Roughly 90% of the population lives exclusively along the Mediterranean coast, with the rest of the land being dominated by the massive Sahara Desert.

The nation has been ruled by several dynasties, from the ancient Numidians and Carthaginians to the Romans, Byzantines, Spaniards, Ottomans and even the French empire. However a longing for freedom and self-governance lived within the indigenous Berber people, and after an eight year long and bloody war with the French they finally claimed their independence in 1962.

Despite still recovering from its eleven year long Civil War against radical Islamic extremists, Algeria has grown to become a well-developed country, ready to take on the challenges it faces in this modern day and age.

Medium sized nation that is the largest nation on the Mediterranean Sea, Algeria's coastline is hilly while the southern border includes the Sahara desert.

With plenty of desert terrain and an Eastern doctrine, Algeria benefits from an investment into tanks and armored units. By building up a small, armoured army and some air support the player could get an early head start on taking Algeria’s AI neighbours Mauritania, Niger and Tunisia, whilst also making sure to keep its south well defended from its other player-controlled neighbours Mali and Libya. 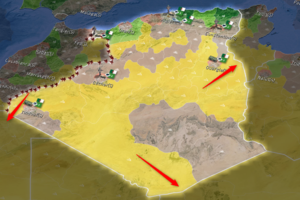 Alternatively, the player may want to invest in a strong Navy and a good diplomatic relationship with Morocco in order to expand upward, claiming the Strait of Gibraltar first and then proceed to control the Mediterranean. Spain’s southern mountain range would make an invasion from there tricky, so a conquest of Portugal could go a long way in helping Algeria expand eastward through Europe.

However in the long game, Algeria benefits from maintaining and expanding through Africa, slowly conquering nations and forming coalitions with the rest till it can lay claim to a giant, continental fortress.

Whilst the strategy stays the same from WW3, the Overkill map changes the game by surrounding Algeria with player nations. Due to this, a strong diplomatic relationship with some neighbours is essential. Algeria should decide early whether it wishes to expand northward into Europe, Eastward into East Africa and Asia or Southward deep into Africa, and then make alliances with the neighbours along its border in order to not fight a battle on multiple fronts.

In Flashpoint things change drastically for Algeria. With almost the entirety of Africa gone, the map forces the player into a northward expansion. However, this could be a blessing in disguise for the only playable African nation. Algeria has two neighbouring AI nations, Morocco and Tunisia, which are ripe for the taking, giving an easy start to expand and guaranteeing a safe southern border whilst being nestled nicely along the southern map wall.

Without the giant island fortress of Africa to conquer, Algeria benefits much more from a strong diplomatic relationship with its European neighbours Spain and Portugal in order to move up into the main bulk of the map. Without these bonds of alliance, Algeria risks being stranded on its section of the map, or caught in a pincer attack by Spain and Italy.

This map not only surrounds Algeria with playable nations just like Overkill, the environmental destruction of the rising tides has also created several “Dead Zones” along the southern border. By fortifying the province of “In Amguel”, Algeria can protect itself from invasion by Mali and Niger, and a good diplomatic relationship with Morocco, Mauritania and the Sahrawi Republic will grant further protection along the southern and western border. This will allow safe expansion to the East, taking advantage of its specialization in Main Battle Tanks and the desert terrain to slowly conquer Tunisia and Libya. 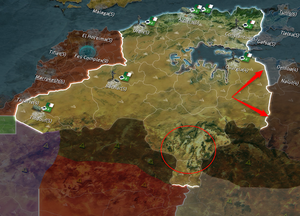