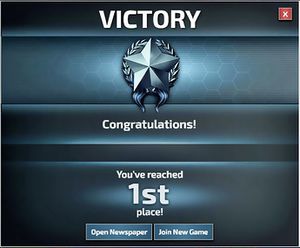 In order to win a campaign in CON, you must be first to reach the required Victory Point limit. Once a winner has been determined...

You can find the number of Required Victory Points to secure your Victory under the player name on the top left panel. If you are playing solo then this value is only dependent on yourself to attain, otherwise if you are in a coalition then each player will be increasing the total VP required as a team effort becomes priority. For example, solo VP required for on map may be 1850, but if 3 players are in the coalition then everyone in it needs to contribute to the new total of 5550. So choose your teammates wisely, otherwise you will have a very heavy load to carry! It is easier to achieve 1850 solo as opposed to 5550 if you have 2 coalition members who are not active, do not cooperate or fail in campaigns.