Officers are special units which provide bonuses and benefits to other units in the same stack (including self). There is an officer for each unit type: Infantry, Airborne, Tank, Helicopter, Naval, Fighter & Submarine. Bonuses provided by individual officers can be seen in the unit description section of that individual officer, including the required player rank and the prerequisite research required in order to mobilize officers (eg. Motorized infantry for the Infantry Officer). A maximum of one active officer of each type is allowed at one time; if the officer dies, he can be re-mobilized. 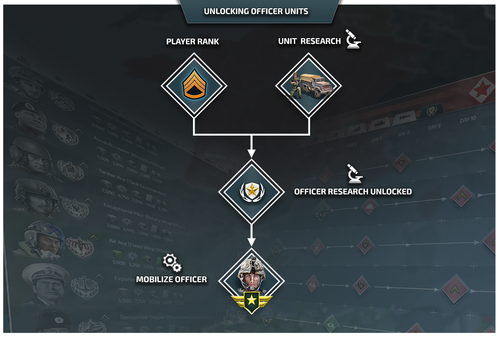 Once mobilized, officers have tiers and upgrades just like any other unit, increasing in stats and bonuses with every research upgrade. Officers can also gain new abilities, allowing them to switch roles (eg. the Airborne Officer gains Stealth and becomes a Special Forces unit). The availability of these powerful units depends on the doctrine the player chooses. The doctrine will determine the day that officer can be researched/upgraded, and influence different stats and bonuses.

When two or more officers are placed in the same stack, the bonuses offered by each one accumulates and applies to their respective units influenced.

Infantry Officers organize, command and lead infantry units. These officers grant combat bonuses to Units in his army, including himself.

Airborne Officers are as tough as they come. Infantry and Towed Artillery stacked with an airborne officer benefit from combat bonuses.

Diligently leading tanks, fighting vehicles and support units, the Tank Commander bestows combat bonuses upon any vehicle under his command.

Rotary Wing Officers motivate their squadron beyond the line of duty, granting combat bonuses to any helicopter unit stacked with them.

A Naval Officer remains calm in the most difficult situations. Any surface ship stacked with him will gain combat bonuses.

Submarine Officers are held to the highest of standards and have extraordinary responsibilities. Any submarine stacked with a sub commander gains combat bonuses. 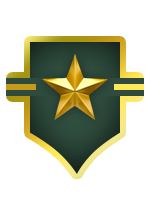