Mobile artillery, such as the M1203 NLOS, is a self-propelled artillery unit that intends to provide networked, extended-range, precise attacks on enemy targets. In general, mobile artillery supports any frontline unit, providing heavy, indirect long-range fire. It is lightly armored; however, and requires support and protection against direct air and ground attack. They are capable of being strategically airlifted and also have some NBC protection.

This unit has the following features on its final tier: 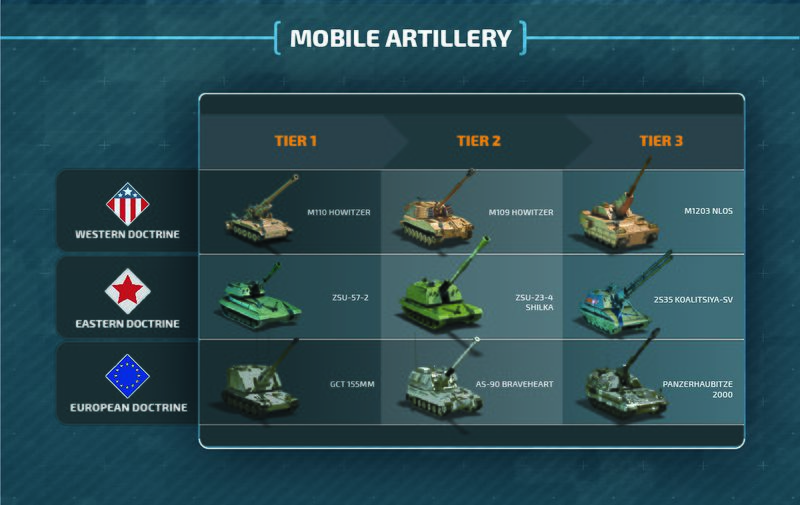 The M1203 NLOS is a tracked hybrid electric/fuel artillery vehicle weighing in at 27 tons. It transports two crew and 24 rounds of ammunition to any frontline with the intent to provide networked, precise, heavy, long-range fire. The fully automatic 155mm/38 caliber cannon has quick-change capabilities that enable the rapid changing of round types and rate of fire. The hybrid technology allows the NLOS to perform key surveillance roles without a running engine, offering tactical stealth as well as the obvious benefits to increased fuel economy.

Weighing in at 55 tons, the tracked 2S35 Koalitsiya - SV howitzer is the most capable unit in the world. Operated by three, well-protected men, the Koalitsiya has a 152 mm/52 caliber main gun, as well as a 12.7 mm machine gun with which to conduct its affairs. The fully automated loading and handling system is capable of firing a wide range of munitions a distance of 30 to 40 km at 8 rounds per minute. She will carry 60 rounds of ammunition on board, with an optional system that allows for reload from a truck. And if that’s not enough, she can also build herself a trench within 12-40 minutes with her entrenching blade.

The 55 ton German Panzerhaubitze 2000 is a tracked howitzer fitted with a powerful 155 mm main gun. She supports a crew of 5, and features a chromium-plated, 8-meter long barrel which is fitted with a slotted muzzle brake for added muzzle velocity. She has a fully automatic loading management system that comes with a standard 32-round primer magazine. She is noted for her high rate of fire, and in a burst, will fire off 3 rounds in nine seconds, and depending upon barrel heating, is capable of firing 10-13 rounds per minute continuously. She holds 60 rounds of ammunition on board.