Difference between revisions of "Iran" 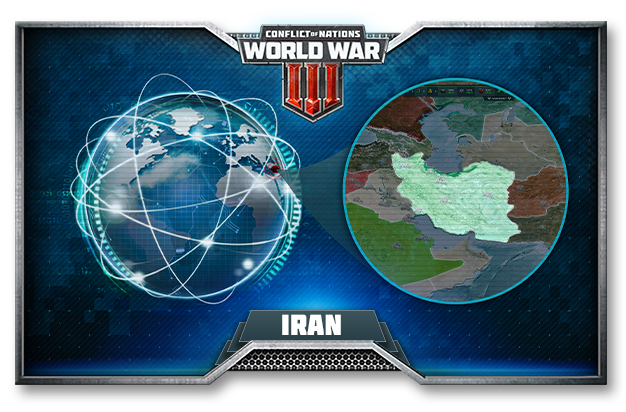 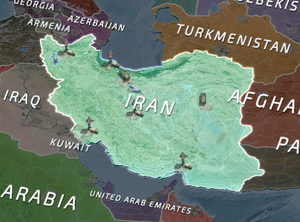 Iran has found itself at the heart of many of the world’s greatest empires, such as the Seleucid, Parthian and Sasanian Empires. These three in particular were known for fighting and keeping back the mighty Roman Empire, successfully keeping them from invading for over 800 years. Yet whilst the history of Iran can be traced far back into the past, the Islamic religion would not find its way into the Iranian peninsula till 636 AD, with the rise of the Rashidun Caliphate.

From here, Islam would become a major part of Iran’s identity, and would stay so till the present day. Various Caliphate’s would control Iran over the years, integrating many aspects of Persian culture into the nation, till the Mongols would take over almost 600 years later in 1220 AD. Even then however, Islam still survived with many Ilkhanate Mongols converting to Islam. As various empires and dynasties would rise from the ruins of the previous rulers, Islam would stay strong as a permanent fixture of Iranian culture and beliefs.

Eventually in 1921 military commander Reza Khan would seize power, bringing in modernism and secularism whilst also officially naming the country Iran in 1935. Oil would become a major point of conflict with Iran and the rest of the world, with the British and US intelligence agencies organising a coup that places General Fazlollah Zahedi in office, who ruled Iran with the efforts of his SAVAK secret police. His rule was short lived, yet the violence would not end with the 8 year Iran-Iraq war estimated to have claimed 1 million Iranian lives. Clerical rule in Iran also became increasingly authoritarian, imposing strict Islamic law onto the nation. Now as the US imposes more sanctions on Iran, each one tougher than the last, and with violence escalation leading to the death of commander Qasem Soleimani, it seems as if Iran is once more on the brink of war.

A large nation, the second largest country in the Middle East that has access to both the Caspian Sea and the Indian Ocean, Iran is a diverse nation consisting of mountains, forest and desert.

Iran finds itself in a very powerful position, essentially acting as a bridge for several Asian nations to start their push into the Middle East and Africa, or forward into Europe, without having to take on the behemoth that is Russia. Neighbouring player nations like Afghanistan, Pakistan and Turkey are going to want to deal with Iran quickly in order to access the different continents, and not all of them will want to do that in a friendly manner. 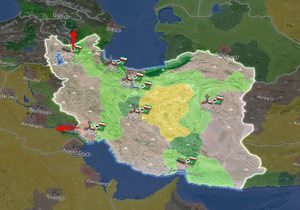 This position gives Iran a powerful bargaining chip, and with its 7 cities providing plenty of resources it should not be too hard for Iran to find some allies. With all this in mind, a good possible strategy would be too ally with Afghanistan and Pakistan in order to guard its east side, whilst pushing into the AI nations of Armenia and Azerbaijan from Tabriz, and the player nation of Iraq and AI nation of Kuwait from Ahvaz, in order to slowly gain ground across the continent.

One thing Iran will need to look out for however is its cities on the coast. With so much action going on in the west and east, sometimes it can be easy to forget the coastal cities, giving nations like Kazakhstan an opportunity to strike from the Caspian Sea. Expansion is always desirable, but a player must think of defense unless he wishes to be destroyed from within.

As per usual, Overkill adds a bunch of new Player neighbours for Iran to contend with, most notably Turkmenistan to the North East, and Oman and UAE to the south. Now the possibility of a naval invasion from the WW3 scenario has become a serious threat in Overkill, and Turkmenistan can invade Iran from the east without being hindered with mountainous terrain like most other nations.

This being said, Iran’s benefits from the previous map have not changed, with it still having a great position and plenty of cities and resources. Therefore, creating strategic alliances is still a very viable option for this nation. If the player were to ally with Afghanistan and Pakistan again, it would be unlikely that Turkmenistan would risk a 3 on 1 fight, alternatively an alliance with Saudi Arabia could help to create a pincer move from land and from sea on the new troublesome Player nations. Of course, alliances with everyone is not possible, so the player will need to pick his friends carefully in this map or risk complete annihilation from multiple fronts.

Surprisingly, in the vastly changed map of Rising Tides, not too much has changed for Iran. Here Iran still has the same neighbours, same benefits, and same problems as Overkill. With some slight adjustments to tackle the new terrain, for the most part any strategies that work on the previous map should work here.

However there is one big catch, the tantalizing Victory Site just slightly to the east in Kashmir. In these maps Victory Sites are key, and with this site being so close it would be foolish to not make an attempt for it. However there are some nations in Iran’s way that need to be dealt with if Iran wants to claim the victory Site for itself. There are many ways to go about this, but one way could be a joint effort with Afghanistan to destroy Pakistan, thereby claiming the site whilst also taking out a competitor. With Afghanistan taking Pakistan's north side, and Iran coming in by land and sea, the neighbouring nation would be easily destroyed and Iran could claim the Victory Site with ease. 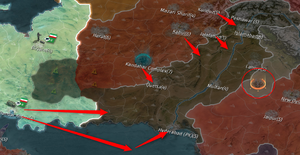 In Blood and Oil, the hunt for Victory Sites is really on, and Iran finds itself right in the center of it all. With an Oil Refinery within its own territory, as well as two other Victory Sites just slightly to the west, Iran will quickly find itself in the center of a major conflict as nations scramble to get a hold of these valuable sites, and what may seem as a massive bonus could turn into a bloodbath if Iran is not careful.

Iran’s first priority should be to make allies quickly, as unlike other maps where this was a viable luxury now it is an absolute necessity to survive. Choosing between the usual trio of Turkmenistan, Afghanistan and Pakistan is always a good attempt to cover the east side and can help in taking out the United States player nation, and alternatively an alliance with Saudi Arabia could take out the rest of the United States whilst also help to claim a further fourth Victory Site. Iran could then take Oman and Yemen to support Saudi, use Pakistan to claim an even further fifth Victory site, and push up with the help of Saudi to conquer Africa, and the game.