Difference between revisions of "Field of View"

Reconnaissance is an important aspect in CON and mastering it is vital to any offensive strategy. This section provides an in-depth look at the two game systems that comprise reconnaissance: Radar and Sight-Range.
IMPORTANT: These two systems work completely independent from each other.

Sight-Range defines an area within which the fog of war is lifted and neutral/hostile armies are revealed.

Within sight-range, the visibility of neutral/hostile units is affected by two features: 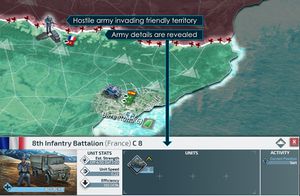 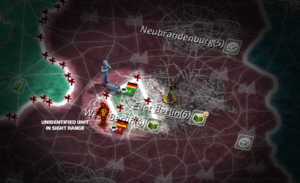 Neutral/Hostile armies outside friendly territory are unidentified in sight-range and marked with a question mark. 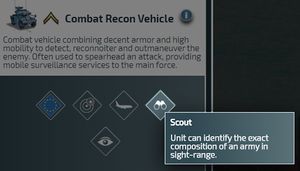 Unit with the Scout feature.

Camouflage obscures the details of an army that is within sight-range of another player and marks it as Unidentified. This is automatic and applies to all units in the game, except naval units.

An unidentified army's details can be revealed in two ways:

Special cases when it comes to camouflage:

A neutral/hostile unit with the Stealth feature is completely invisible to you in sight-range, and can infiltrate your territory without declaring war. 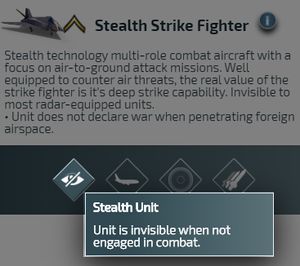 Unit with the Stealth feature. 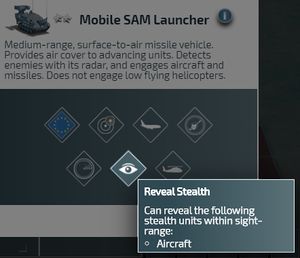 Unit with the Reveal Stealth feature against aircraft.

A unit with the Stealth feature can only be revealed in two ways:

Units that are equipped with radar can locate neutral/hostile units by detecting their radar signatures. 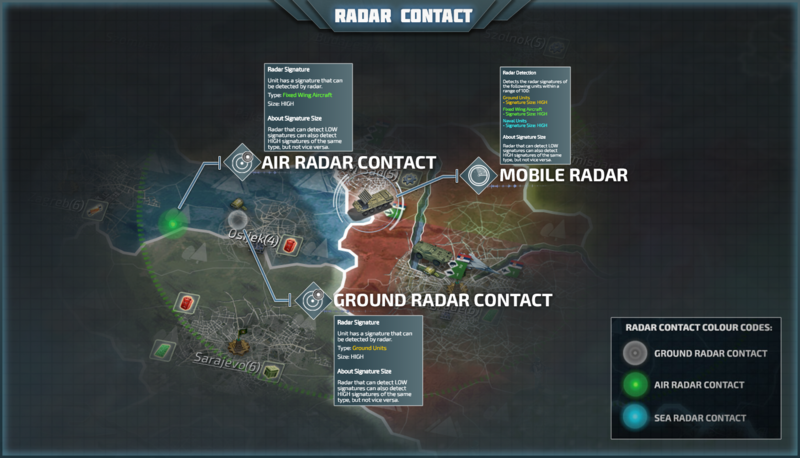 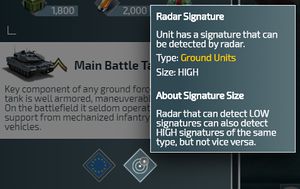 Almost every unit has a radar signature which consists of two attributes: Type and size.
Possible signature types: 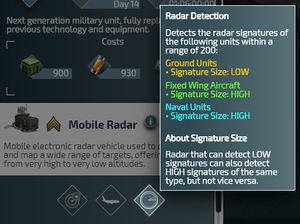 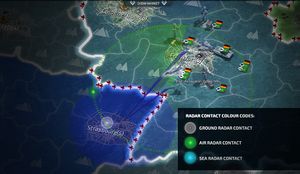 Radar systems that can detect a LOW signature of a given type can also detect its HIGH signature.

Air units can use the patrol feature to automatically attack enemy units if they are within patrol range.

Ferrying is a great way of re-positioning your aircraft to gain a strategic advantage.

Aircraft who are sent to a province/city which does not contain an airbase/airport will use the closest airport to the destination and travel via transport truck for the duration of the distance. If an aircraft unit is on the way to a city which has it's airbase destroyed mid-flight, the aircraft will ferry back (via air-flight) to the closest airbase and refuel. You might also come across a situation where the airbase your aircraft is using is destroyed, as a result your aircraft will turn into a transport truck. You will need to ferry it to a closeby city or province which houses an airbase/airport but keep in mind that transport trucks are fairly slow and your units are susceptible to being picked off easily. Alternatively you can rebuild/repair the base it was originally using. When the aircraft successfully ferries, it will permanently change its location of re-fueling to the current airport, this means that the respective base/port is acting as a base of operations for the aircraft situated in it.